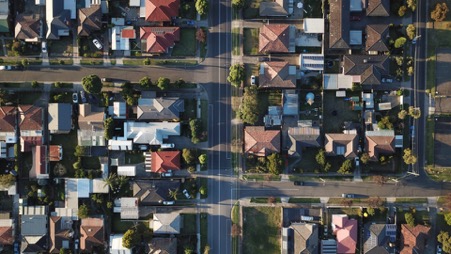 New research has tipped national property values to soar in 2020.

Sydney and Melbourne will lead the charge. And all capital cities except Darwin will come along for the ride, too.

That’s the key finding from a report by SQM Research, which is predicting prices to increase between 7 and 11 per cent next year.

So long as the official cash rate holds firm at 0.75 per cent, the economy begins to recover, and APRA doesn’t slam on the brakes until late 2020 at the earliest.

That’s SQM’s base case – though it recognises further rate cuts would lift prices even faster – and it has economists worried about rising household debt levels.

Should the RBA drop the cash rate to 0.5 per cent before April 2020, SQM predicts national prices rising between 8 and 13 per cent next year, and by up to 17 per cent and 16 per cent in Melbourne and Sydney.

Markets believe there’s little chance (13 per cent) the Reserve Bank will cut rates at its next meeting in December.

But most economists believe it will move in February – despite RBA governor Philip Lowe telling a room of central bankers in August that further rate cuts risked boosting “asset prices in a slowing economy, which is an uncomfortable combination”.

The Reserve Bank cut the official cash rate in June for the first time since August 2016 – pairing it with further cuts in July and October.

SQM’s managing director Louis Christopher said the cuts were one of several factors driving the rapid rebound in house prices.

“The Sydney and Melbourne housing markets have recorded a sharp turnaround in the second half of 2019, following on from the surprise result of the federal election, interest rate cuts, the loosening of credit restrictions and ongoing strong population growth,” Mr Christopher said.

“These factors are expected to drive the national housing market into 2020.”

But that doesn’t mean we’re about to witness a boom as large and sustained as the price run-up between 2013 and 2017, Mr Christopher said, as property is too overvalued and Australia’s two largest markets are “forever reliant on cheap credit”.

“Recovery momentum has been building up in the last few months,” he told The New Daily. “And even if the economy doesn’t improve a lot, it has got a stable footing.”

If house values rise as much as SQM predicts, people will feel richer and Australia’s struggling construction sector will soon fire up again, Professor Hogan said.