The Top 10 most in demand suburbs in Australia

The weakening Australian housing market has caused the most popular suburbs list to be flipped on its head.

Buyers are sensing an opportunity amid the Sydney property downturn, with new figures revealing suburbs in the Harbour City are becoming in demand.

Realestate.com.au’s data also, again, highlights the strength of the Adelaide market, which is bucking the negative national narrative and cashing in on interstate investors chasing value.

The top ten most in demand suburbs in Australia measured by views per listing on realestate.com.au are located in the South Australian capital.

Most of those are concentrated in the hills region to the city’s south — Crafers West, Stirling, Aldgate, and Belair, while Millswood is more centrally located. 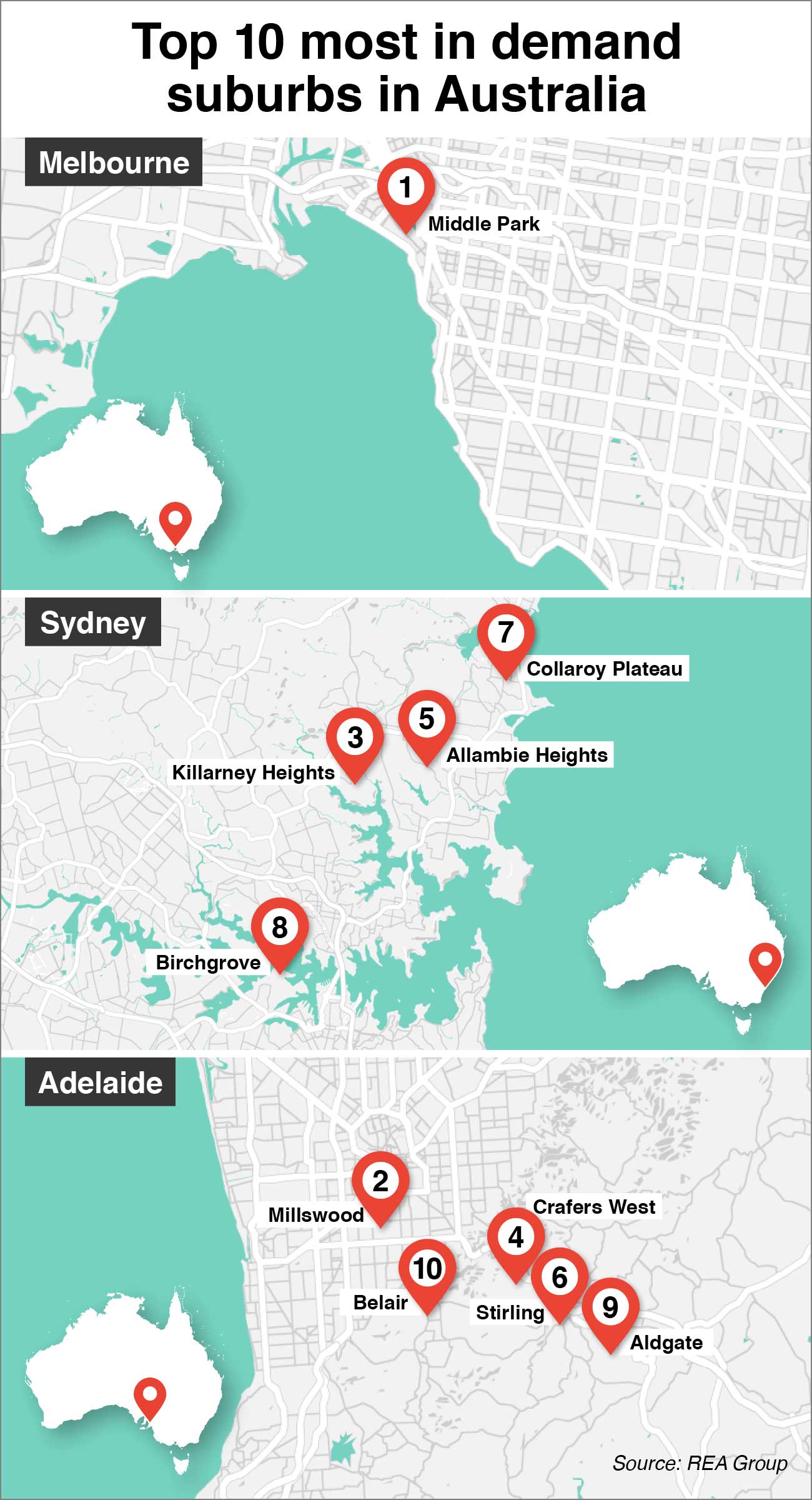 “That’s partly been driven by property investors coming out of Melbourne and Sydney because we know that there is a lot of search activity coming out of those locations.

“Also, the economy’s doing pretty well in Adelaide, and that seems to be underpinning higher levels of demand than we’ve seen previously.”

Interstate buyers are keeping a close eye on the Adelaide property market.Source:Supplied

The other surprising feature of the in demand list is the inclusion of four Sydney suburbs — Killarney Heights, Allambie Heights, Collaroy Plateau, and Birchgrove.

Ms Conisbee said property in the major city had, up until recently, been inaccessible for nearly all buyers, but the weakening in the market was presenting opportunity.

“The premium suburbs of Sydney are really attracting a lot of interest primarily because pricing has come back, and I think people feel they’re more accessible now,” she told news.com.au.

The only suburb in the top ten outside SA and NSW is Melbourne’s Middle Park, which is currently the most in demand in Australia. 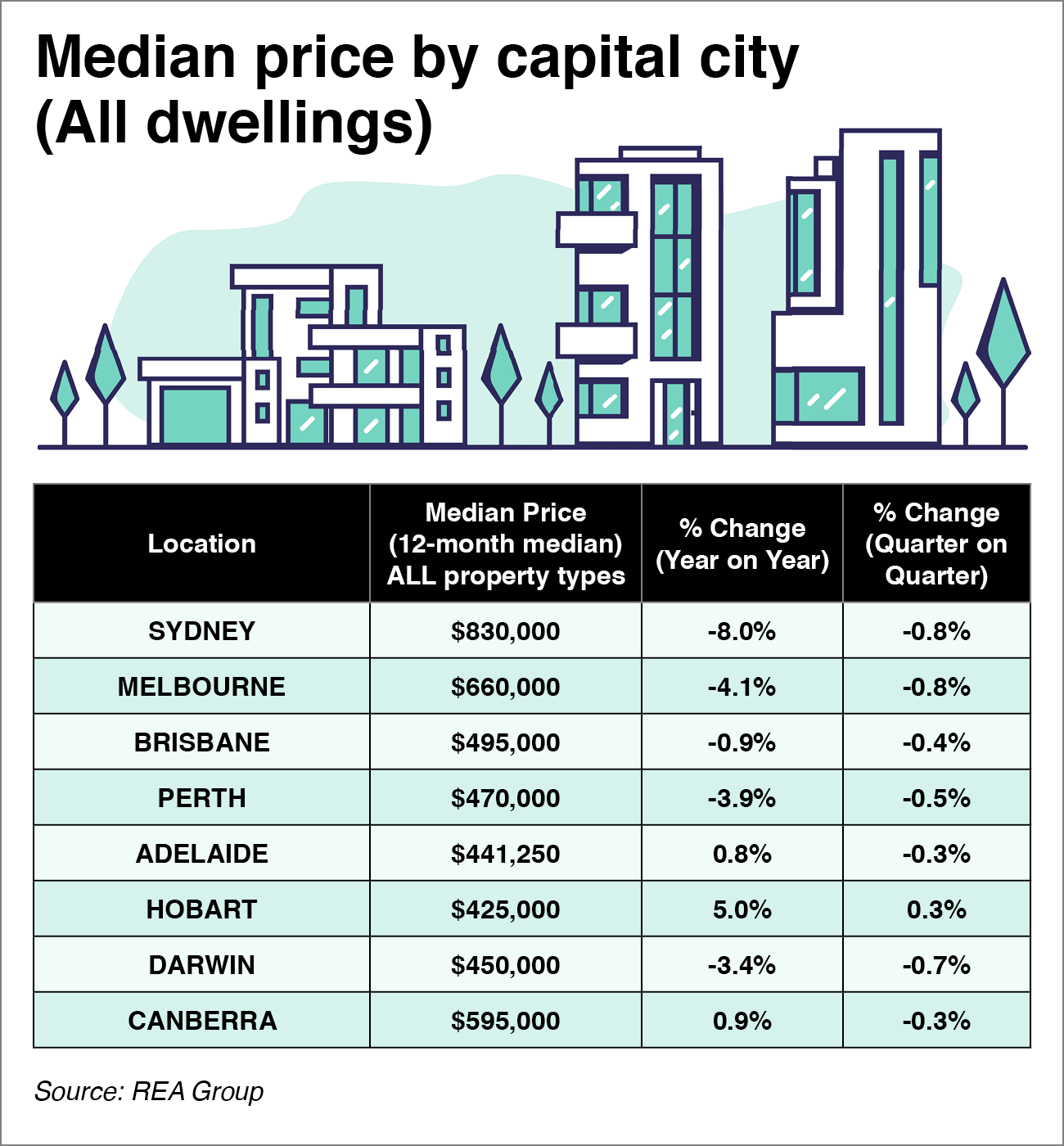 Meanwhile, the Melbourne and Sydney property markets continues to slide, with both of Australia’s major cities’ median price losing 0.8 per cent in the last quarter, the figures show.

This takes Sydney’s year-on-year fall to 8 per cent and nearly 10 per cent in 18 months.

Melbourne’s is nearly half that, sliding 4.1 per cent.

The latest figures are in line with the property site’s far less gloomy reading of the housing market than other providers, with Ms Conisbee rebuking claims Australia is in the middle of the worst downturn in decades.

She says a key indicator for a dramatic property bubble burst is a large scale of homes being forcibly closed and sold.

The economist said any sign of a dramatic downturn in the housing market would be shown on the site because a high number of listings would be forcibly put up for sale.

“We’re not seeing a massive uptick in new listings, they’re actually going down,” she said.

“What seems to be happening is people are holding off, watching and waiting.”

Perth and Darwin lost 0.5 and 0.7 respectively for the quarter, and both are more than 3 per cent lower year-on-year.

Melbourne is where realestate.com.au’s reading of the market differs from other leading suppliers of property modelling.

CoreLogic’s most recent data says the Victorian capital has lost 10.3 per cent from its November 2017 peak, which it says makes it the worst peak-to-trough fall since the research firm began collecting data in 1980.

“Melbourne has just edged into new record territory,” CoreLogic head of research Tim Lawless said at the start of April.

“Melbourne frequently gets lumped in with Sydney when discussing the falling market, but the reality is Melbourne is holding up a lot better,” she said.

“Prices are down, but the falls are less than half those experienced by Sydney.”

She says a number of indicators paint a rosier picture of the Melbourne market, such as views per listing, strong rental demand, rental prices, and foreign property seekers being far more active in searching for investments there than in Sydney.

“With all the measurements we look at, we’re not seeing Melbourne and Sydney running jointly together,” Ms Conisbee told news.com.au.

WHAT’S THE DIFFERENCE IN THE MODELLING?

Ms Conisbee admits there is a number of ways to track movements in the property market.

The most simple is to look at median growth.

“The problem with that is that it doesn’t take into account that the properties sold 12 months ago aren’t the same as the properties that are selling now,” she said.

“We try and model all of Australian property, so we’re comparing like-for-like over a 12-month time period.”

“What that essentially does is it uses all the attributes of property and all of the information about properties transacting, and then the model estimates that if every property in the market was going to sell today, what price would it sell at,” he said.

“And then we use that to create the index to measure the change in the market.”

Mr Kusher said he was unfamiliar with the methodology used by realestate.com.au but said there was issues with providers that used a sales-based system.

“Our hedonic model is a bit more of a holistic approach to measuring the change in the market.”